Patience: The Nature Photographer’s Only Friend

As a photographer, I am a witness to nature, not a controller of it.  I put myself in a place where the opportunity and circumstances might offer me a unique chance, and then I take what nature gives me. Nature, however, is on its own clock, not mine; and sometimes it will take its own sweet time.

Patience is, quite simply, an act of force. 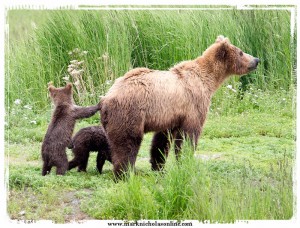 We cannot just “be” patient. Sometimes we just pretend to be. It can agonizing, particularly during days such as the one I had today. I was sure that there was some Grizzly bear action somewhere, and yet I stood, and sat, and stood, and sat, on another platform surrounded by water and fish – yet surrounded by nothing worthy of a photograph.  No bears at all.  My experience told me not to panic, although my flight out of Brooks Lodge on Katmai Island in Alaska was going to depart only a couple of hours later.  If I lost the shot today, I possibly lost it forever.

I stayed and more than a couple of hours of nothing passed by.  Unlike many of the other more photographers, I forced myself not to leave. My experience told me that things could be coming my way.  I was not going to follow the action (and the restless). Today I was going to let the bears come to me.

Photographers can become impatient and frustrated, particularly those who make their living shooting.  Some went back to the lodge grumbling a bit.  If you want the shot, tuck in.  The words of an old mentor echoed in my mind that being at the right place at the right time means… in this case… not being inside the lodge. Today Momma Nature would decide when and if I would get what I wanted. Or maybe she might offer something else entirely. 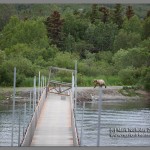 Then, almost to prove my point, without pomp, barely noticeable, a bear walked along the beach on the other side of the bridge and took a nap near the foot of a bridge leading to our vantage point. In doing so, the park rangers closed the bridge so that ironically the photographers who were not on my side of the bridge could no longer get across (to any good photographic angle). Then, another bear wandered over near some fishermen. A third approached from our back quarter to start fishing, and running. Then… big momma bear and her three cubs were participating in the action.  Another two bears in the bush popped their heads up and down.  Things became active and animated and the shutters from those of us on the platform started firing. 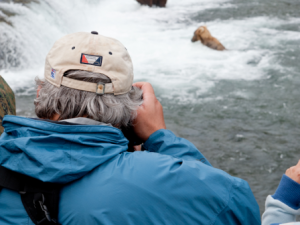 It’s hard to be perfectly patient. Nature shooting not only demands sitting through the quiet times, but also requires a tacit (even a pretend) agreement not to be jealous of our colleagues’ shots when they are somewhere else creating magnificent posters. Even two side-by-side photographers will not see, or shoot, the same things, and oftentimes one shooter gets those brilliant moments to the frustration photographers standing just a couple of feet away. It is hard for me not to kick myself when I mis-focus, or fail to capture something in the periphery.  And it really is hard to celebrate others’ successes when we “losers” were so damn close.

There is payback sometimes as well. I’ve gotten my share of wins – and today was another of them. If I ran around following the action I might never catch anything at all. I’ve learned that I don’t get to shoot everything I always want, or plan for, but hanging tight, being technically ready and aware is the key to getting something brilliant – from time-to-time.

That is, after all, what we’re here for.

Here are a few of the shots from that period of time.