Review of the Dynamic Perception Motion and Timelapse Slider 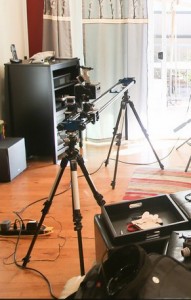 Through the years I have done a number of things in order to try to accomplish simple moves with my video work. I have used everything from wheelchairs, furniture dollies, remote toy cars and manual sliders, I have placed my cameras on pretty much anything that smoothly moves that it is wavering on two feet.

On the photography (non-video) side of things, I have spent nearly 18 years trying to figure out how not to move. Actually, that may be a bit of an overstatement as creative photographic techniques were actually rather simple to accomplish even through the use of handholding.

The modern DSLR  changed everything. It gave me, the photographer, a camera with such a narrow film-like depth of field and I could now create cinematic shots with gear that I already owned. This opened my eyes as a photographer to movement. Not only was I thinking about creative motion photography on a daily basis, but I was able to accomplish complex photographic techniques such as time-lapse and stop motion photography that I had never really considered doing in earlier times.

The piece of gear that I believe changed my photographic life was the Dynamic Perception Stage 1 motion dolly. It let me move the camera with great precision without touching the camera, and it would trigger the camera shutter at intervals that I established. The process was completely automated. Stage 1 rails still go everywhere that I go and I now have a much wider collection of creative tools at my disposal (the Stage 0 and Stage 1 systems are nearly identical except for the rail itself – the stage 0 is a fixed aluminum rail and the Stage 1 is a modular/portable system).

The dolly is system is constructed with either an aluminum track or wonderfully machined rails (depending on whether you choose the Stage 0 or Stage 1 system). A synthetic toothed belt is set down the the inside of the rail. Above the rail sits a cart/platform through which a motor (either a servo motor or a stepper motor) which turns a gear which moves up or down the belt.  The motors come in different strengths/speeds. The stepper motor is necessary for repeatability.

The motor is controlled either by a small control box called an MX3 or by a joystick controller known as the AT2. The unit can be programmed to move continuously or in small increments and will fire the shutter either over time or in a shoot-move-shoot manner. The AT2 is fantastic for video although it can also move at a predetermined speed (set with a small knob on the unit). The MX3 allows for very fine control although it lacks the tactile interaction of a simple joystick.

Review of the DP Dolly System

As I’ve said, the unit changed my life by allowing time-lapse and controlled video moves. This is a visual unit as the camera is placed onto the same platform as the motor (you’ll need a tripod head or other connection point) so there is motor noise evident. This is a non-issue with off-camera mics, but is worth noting.

The huge upside is that this world is now completely accessible, very light/portable and quite capable. It can function as a manual slider (without the toothed belt) or a completely automated solution.

It is worth mentioning that the unit is not designed as a video slider and other units are far smoother and more controlled from a pure video/film perspective. If you are looking for a true cinematic slider and are shooting motion pictures/pro videos, there are other options (typically much more expensive options) to consider. The Dynamic Perception system is really designed to work with the toothed belt and motors and from a cost perspective is extremely capable in that regard.

One other problem I’ve had with the unit is something that can be overcome with education or, in my case, by using another controller instead in conjunction with the DP. The MX3 control box is complicated with lots of technical words, abbreviations, and so forth. With just a couple of buttons and lots of menus and sub-menus, you have an incredible amount of control but this can be a real challenge to navigate and more aptly – troubleshoot, particularly when you want to navigate quickly. For me, a pretty tech savvy guy, this complexity remained a disincentive to using the rails. With that in mind, bring on the eMotimo.

The magic in the Dynamic Perception system is the ability to move along the rails in a controlled fashion and fire the shutter in a completely pre-determined manner. Extra gear is required to pan or tilt the camera in addition to movement down the long axis. Theoretically, any motor controller would suffice and shortly thereafter a solution came along that further changed my world.  Welcome eMotimo.

The eMotimo is a pan/tilt head that also fires a camera shutter. The thing about the eMotimo was that in addition to controlling movement along the pan/tilt axis, the auxiliary motor output of the device also would control movement a third motor – such as the motor sitting on the Dynamic Perception cart. This gives me complete automation and repeatability along three (not two but three) axis. The eMotimo and Dynamic Perception match allows for control in all three dimensions. Unlike the MX3, the interface of the eMotimo is simple and extremely fast to navigate. Just set a starting point and ending point and the eMotimo would make the move, stop when required and fire the shutter. Many of the intricate features of the MX3 which I wouldn’t have used anyway were discarded in exchange for the speed and convenience of the eMotimo. Now I had three axis of movement no matter what I did. I even use the eMotimo as a Dynamic Perception controller even if I did not need pan and tilt.

The eMotimo is just one option in a world inventing new options all the time. Today, however, the partnership between the DP rails/cart and eMotimo is a perfect marriage, incredibly fast and convenient; and I am completely comfortable recommending both. Just check out the collection of amazing videos produced with these two pieces of gear: Dynamic Perception and the eMotimo, individually and together, and you’ll be sold. At this price point, what you get is rather incredible.

Now Dynamic Perception and eMotimo are separately aware of this, each now offering complete 3 axis solutions. That’s okay. Pick one, pick the other, mix and match; all up to you. They are both world-changing when it comes to the everyday working photographer.

Before I wrap this up, it is worth noting that there are wonderful DIY solutions for camera sliders, triggers, rails and so forth that can be constructed for just a few dollars. I’m not that kind of technician. I want to buy reasonably priced gear and get out and shoot and while this gear is anything but cheap, it was groundbreaking for me. There are some wonderful plans for this type of stuff if you are so inclined to make it yourself. Motors are easy to control and capabilities with Arduino boards and other similar programmable boards allow for pretty much anything.

Nevertheless, the true value is not the mere movement but the ability to fire the shutter exactly in the manner that it needs to.  For shoot-move-shoot time-lapse that means firing at certain times. The MX3 will do that (with a bit of math) and the eMotimo will do that and do all the calculations for you without mistake or a second thought. That was much of the magic for me.

Now let’s get off our tuches and shoot.